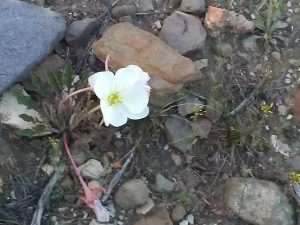 Desert primrose in the Uintah Basin

The Uinta basin railway will be devastating to the planet and the people.

The easiest way to submit your written comments is via the “Submit Comments” tab at http://www.uintabasinrailwayeis.com/.

This was written by the center for Biological diversity:

The easiest way to submit your written comments is via the “Submit Comments” tab at http://www.uintabasinrailwayeis.com/.

SITLA is seeking a land transfer of 440 acres of BLM land. Consider making a public comment. UTSR is against this transfer because The Ute Tribe responded in a letter dated 8/2/2016 that they did not support the land exchange because the land is within the exterior boundaries of the Uintah and Ouray Reservation and assert ownership of those lands. The exchange was also brought up to the Ute Business Committee on 4/24/2017 and they opposed the idea. 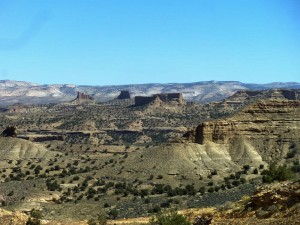 FOR IMMEDIATE RELEASE Contact: Heather O’Hanlon July 9, 2018 (801) 539-4129 Proposal for Transfer of Federal Land Parcels in Uintah County to State of Utah Vernal, Utah – School and Institutional Trust Lands Administration (SITLA) has requested title to 440 acres of federal parcels in T11S-R25E, Sections 5, 6, and 8 of Uintah County under the authorities of the Utah Enabling Act of July 16, 1894. Transfer of the parcel would fulfill the intent of the Utah enabling act to support the state’s schools through the land grant managed by the state. The Bureau of Land Management, Vernal Field Office (VFO) has completed an Environment Analysis to analyze the transfer of these lands from BLM to State administration. A 30-day public comment period will open on July 9. “The parcel requested, both surface and subsurface, are isolated from other BLM lands”, said Travis Kern, VFO Manager, “so they are administratively difficult to manage by themselves, and are entirely surrounded by private lands.” The Environmental Assessments are available for review at the following ePlanning links: http://go.usa.gov/xNwRJ. Comments can be added by clicking the “Documents” tab, then click the “Comment on Document” button. Alternately, comments may be submitted by email to BLM_UT_Vernal_Comments@blm.gov or by mail to the following address: BLM-Vernal Field Office, Attn: Stephanie Howard, 170 South 500 East, Vernal, UT 84078. Comments should be postmarked on or before August 9, 2018. For additional information, please contact Stephanie Howard at 435-781-4469. Persons who use a telecommunications device for the deaf may call the Federal Relay Service (FRS) at 1-800- 877-8339 to leave a message or question for the above individual. The FRS is available 24 hours a day, seven days a week. Replies are provided during normal business hours.

Some pieces are here that I saw from reviewing the Environmental assessment.

This exchange would directly benefit three Enefit related projects involving oil shale development. The parcel is the piece isolated with in this green map showing Enefits current holdings which are private property. 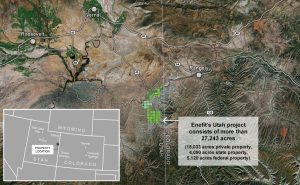 map from Enefit web page land requested for trade is within the green area that Enefit all ready has leases on.

Excerpts from the EA: from page 3

The BLM has determined that the Utility Project, RD&D, and South Project are not connected actions to the Indemnity Selection. All four projects are proceeding independently because they do not require the approval of any of the other projects to proceed as proposed. Also, all four projects are subject to different authorities: the Indemnity Selection is subject to 43 CFR 250, the Utility”

“3.2.1 GEOLOGY/MINERALS/ENERGY PRODUCTION The federal government currently owns all mineral rights associated the 440 acres. …. Oil shale is found in the Green River Formation in the Uinta Basin, this formation lies in this parcel. The In Lieu selection project area has areas where the overburden above the oil shale resource is less than or equal to 500 feet, which makes it a geologically prospective oil shale area. The shale under this parcel contains 30 – 40 feet thick of 35 gallons per ton of shale oil (Vanden Berg 2008) (Perkes 2018). The lands were classified as mineral lands by the USGS in 1916, but there is no finding of “Mineral in Character” 1  and there is no Known Oil Shale Leasing Area” established, therefore the BLM does not accept the 1916 mineral land classification. In addition, the In Lieu selection area was not identified in the Programmatic Oil Shale ROD (BLM 2013) as being available for oil shale development. The In Lieu selection area is completely surrounded by land and minerals that are privately owned (see the map in Appendix B). The owner of those lands and minerals has expressed interest in permitting an oil shale strip mine and processing plant through the State of Utah.

foot note 1 It is my professional opinion that oil cannot be commercially produced from this parcel’s oil shale for the following reasons. 1) There is no commercial production of oil from oil shale currently in the United States including Utah, Colorado and Wyoming. 2) The Rand Corporation, under contact with the U.S. Department of Energy, estimated surface retorting plants (including mining and processing) would unlikely be profitable unless crude oil prices were $70 to $95 per barrel (Bartis, 2005). The BLM used the inflator calculator from the Bureau of Labor and Statistics to inflate these 2005 dollars to $91 to $123 (BLS, 2018). In March 2018 the price of oil in 2018 has been between $58 and $72 per barrel per the NASDAQ, 2018). 3) The size of the parcel would not allow independent development because of the lack of reserves to offset necessary financial investment. At a moderate size facility (25,000 barrels per day) there is only about four years’ worth of shale oil resource in the ground of this parcel. The four years estimate does not account for mining and processing losses or for the ramp and box cut that would be necessary to remove the 300 foot overburden but would also substantially reduce the amount of oil shale that could be extracted. Further the four years estimate assumes that processing would happen offsite to avoid a large capital investment because it would not by itself justify expenditures for construction of a primary and secondary treatment facility to remove nitrogen from the shale oil to reach the specifications for conventional oil. Based on these factors the 440 acres is not “Mineral in Character” for oil shale. Perkes, 2018″

“There are no known Prehistoric or Native American historic sites within the project area. The following Native American tribes were notified of the proposed undertaking via certified letter: Northwest Band of Shoshone Nation, Goshute Tribe, White Mesa Ute Tribe, Laguna Pueblo Tribe, Santa Clara Pueblo Tribe, Navajo Nation, Ute Tribe, Hopi Tribe, Southern Ute Tribe, Ute Mountain Tribe, Zia Pueblo Tribe, and the Eastern Shoshone Tribe. They were asked to identify traditional cultural places or any other areas of traditional cultural importance that need to be considered within the parcel. None of the tribes provided information about known sites or specific religious concerns. However, the Hopi Tribe responded to our inquiry and considers a “exchange of federal lands containing National Register eligible historic properties constitutes an adverse effect” and requests continuing consultation. They would also like to see a cultural survey and report for the proposed area. The Santa Clara Pueblo also responded and would like to be notified if cultural resources will be impacted due to the land exchange. The Ute Tribe responded in a letter dated 8/2/2016 that they did not support the land exchange because the land is within the exterior boundaries of the Uintah and Ouray Reservation and assert ownership of those lands. The exchange was also brought up to the Ute Business Committee on 4/24/2017 and they opposed the idea. Per conversation with SITLA and Utah SHPO, cultural inventories and additional consultation related to any proposed development after the exchange are required, pursuant to Utah Code (9-8-404). The State must afford historic properties the same level of protection as would the BLM under Federal law. However, The State of Utah is not required to conduct Tribal Consultation for State managed lands. A literature review of cultural resources within a one mile buffer of the project undertaking will be sent to the Hopi Tribe, Santa Clara Pueblo, and Ute Tribe.”