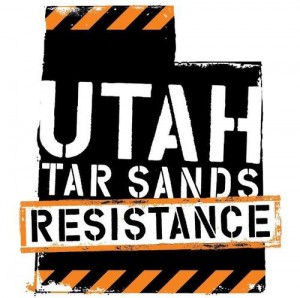 Utah Tar Sands Resistance is a grassroots organization of people determined to prevent the commercial development of tar sands and oil shale mining in Utah, and the Colorado Plateau region.  Preparations for the first tar sands mine in the United States, clear-cutting forests and scraping “overburden” from the land, has begun and continues in Eastern Utah our Vigil has been there to witness, record and STOP the project.

Tar sands and tar shale mining would make our rivers and aquifers toxic. Thirty million people depend on the Colorado River for drinking water, could become poisoned from US Oil sands run off entering the river system.

Tar sands and tar shale mining are also the dirtiest forms of energy on the planet. Extracting and refining them produces three to five times as much CO2 as petroleum. This contributes dramatically to climate change. As responsible beings, we need to put our resources into developing cleaner energy solutions and, more importantly, ways to use far less energy in our everyday lives. Tar sands and oil shale in Canada are already playing a large role in the destruction of our planet, and we must not allow this to happen in Utah.

Mining tar sands and tar shale also devastates ecosystems. At PR Springs, U.S. Oil Sands’ strip mining process would clear away lush forest of pine, spruce, and aspen; remove the soil; grade the land; and pulverize the earth to extract every possible ounce of oil-containing rock. After removing and crushing the rock and processing it to extract the oil, the company would be leaving a moonscape of rubble that looks, in the company’s own chilling words, “as clean as beach sand.”

UTSR does not protest against the Ute Indian Tribe. We do not protest the Ute’s involvement with natural resource development or any use of their land as a sovereign nation. UTSR recognizes Ute tribal sovereignty and supports all lands within the Uncompahgre reservation be restored to the ownership and control of the Ute people as their sovereign land.

Take a look at Alberta, Canada and you can see why we cannot allow this to happen to hundreds of thousands of acres of wilderness in Utah, leaving a vast expanse of nothing of toxic pollution.

Safe drinking water, air, and land are human rights. Beautiful wilderness is our heritage. We deserve better, and so do all other species.

In our effort to stop tar sands and tar shale before it begins commercially in the U.S., we’re building coalitions with front-line communities, hosting community discussions in the Salt Lake Valley and surrounding areas, and joining with local and national allies committed to protecting our planet and human rights.

We believe that direct action is a powerful tool, particularly when all other options have failed. We use creativity in strategic and inspirational ways to confront power.

Utah Tar Sands Resistance is an all-volunteer group. We have much work to do in order to stop tar sands mining. Please join the Resistance now, and help ensure we all have a livable planet!