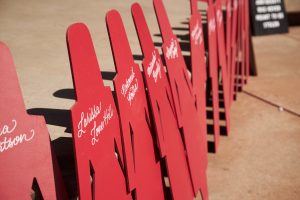 Honoring those Missing in Utah, Red Dolls with the names of missing people reflect only a portion of all those affected.

Did you know May 5th is Murdered and Missing Indigenous Women Day of Remembrance in Utah?

Join MMIW+ of Utah,  Restoring Ancestral Winds and representative Angela Romero for a Webinar on May 5th to learn about MMIW and what is happening in Utah.

Tar sands mining and other extreme extraction of fossil fuels harms Indigenous women, children and men. Missing and Murdered Indigenous Women of Utah formed to raise awareness about this issue and to listen to and honor the people who are affected by this issue. Utah Tar Sands Resistance participates as an ally to MMIW+ of Utah by sitting as a volunteer on the MMIW+ of Utah committee formed by PANDOS.

May 5, 2021 at 6:00-7:00pm MST for a discussion and Q&A on Utah’s MMIW+ Taskforce with Representative Angela Romero and Restoring Ancestral Winds.

MMIW+ of Utah Chair, Michelle Brown, will facilitate the webinar and read questions from participants at the end of the discussion.