In honor of the day US Oil Sands went bankrupt Utah Tar Sands Resistance held a party this morning at the rarely used tar factory on Seep Ridge Road. We came with a new banner, some music and announcements about the bankruptcy of US Oil Sands in 2017. US Oil Sands has wasted land and resources and cheated investors due to their bankruptcy. The idle mine is on SITLA land stolen from the Ute people it is on the Uncompahgre reservation. 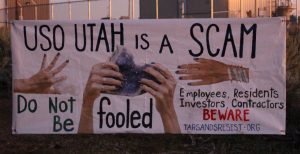 Now called USO Utah, the inactive mine site and factory has reduced it’s leasehold considerably. USO Utah cleared the bankruptcy courts and restructured therefore a clean bill of credit has been given to USO Utah. The contractors are there tuning up the unused equipment and polishing the useless factory to feed the real golden goose: foolish investors, creditors and the tax payers of Utah!

We arrived early to greet workers and let them know about the anniversary and the scam. We were there to let arriving contractors and service providers know that anyone who works at this project should be aware that they may not get paid. Many investors have lost their fortune to tar sands scams. US Oil Sands have harmed local workers and their families by exploiting the bust and boom cycles these scams thrive on. 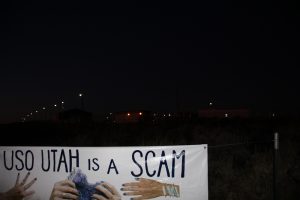 2020 Resources is the new name of US Oil Utah. Here is the idle tar factory.

Do Not Be Fooled USO Utah is a SCAM!