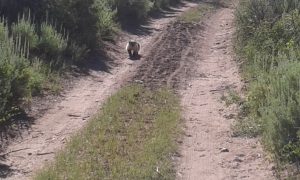 This morning at our vigil camp around 9:30 am I noticed an animal moving across the meadow. It looked like a large cat or small dog from afar so I grabbed a camera and ran over to the meadow.  It was an American badger. The badger ran up the dirt road and I got a few pics! 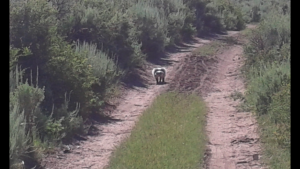 American Badger at PR Springs, raises a protest with hissing and puffing when I try to follow.

A one point it turned toward me and puffed up and growled. It was grunting and hissing as it ran off. Another amazing animal flourishing on the Tavaputs Plateau in the book-cliffs. The American badger makes it’s home on SITLA land leased for tar sands strip mining.

The badger has an interesting quality called “Embryonic diapause” or delayed implantation. This means the embryonic blastocyst does not immediately implant in the uterus after sexual reproduction. Mammals may undergo diapause to avoid the risk to their own lives during unfavorable conditions.