We support Standing Rock and all resistance to DAPL!

As US Oil Sands lays off workers at PR Springs and “shutters” facility.  Utah Tar Sands Resistance shares the joy with the Earth and inhabitants of Main and PR Canyons of a halt to the incomplete tar sands processing plant and strip mine at PR Springs. 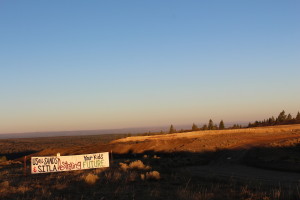 US Oil sands has stripped up 95 acres and destroyed Children’s Legacy Camp unnecessarily. US Oil Sands, a Canadian Company has laid off most of its Canadian and American Employees and shuttered the speculative tar sands strip mine. According to a statement USOS released on December 2nd:

“In order to preserve working capital, the Company has temporarily laid off most Canadian and U.S. employees, retaining only those essential to close a financing. Certain U.S. employees may also be retained on a part-time or short-term basis to assist in equipment preservation and lay-up of the facility and to maintain basic U.S. operations.”

“The Calgary company developing an oil sands mine in Utah says it has delayed the project’s startup and temporarily laid off most of its Canadian and American employees while it secures new financing. US Oil Sands said: “the PR Spring project is mechanically complete but requires additional capital to cover the remaining commissioning and startup costs.”

The history of this project shows that they have been promising to begin producing oil nearly every year since 2008.  The reality shows that they are exploiting the land, the people and the future. US Oil Sands lays off workers over and over again as part of their operation plan.

The public records at U-DOGM web page shows that US Oil Sands also has numerous items to address in the NOI to commence large mining operations, found here:

The cost of this project is so far from profitable. The public needs to know that the decision makers in Utah are selling them and the school trust lands out. The so called “Green River formation” must be left in the ground, our air, light and water sheds preserved.

US Oil Sands continues to raise money and promises (again) to begin producing oil in 2017. UTSR is building awareness and resistance to stripmines and pipelines everywhere.

UTSR will be resuming our public protest vigil in Spring 2017.

We will host the 5th annual Intergenerational campout in June.