14 people unreasonably detained for several hours and 10 adults arrested after a nature walk with children, Seep ridge Road, Uintah County, UT – Ten participants of Utah Tar Sands Resistance’s 4th annual family camp out on the Tavaputs Plateau have been arrested after completing biodiversity studies close to the country’s first tar sands strip-mine. A group of children and adults walked to the wooded area next to the Children’s Legacy camp site to count plants and identify different species, in an area that several members of the group had camped at freely in previous years. 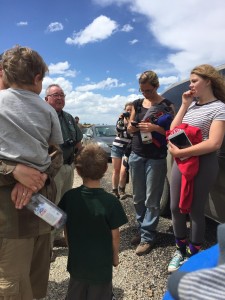 During the annual inter-generational camp out officer Ronald Barton detains families as retaliation for protesting against a tar sands strip mine.

Upon returning to their vehicles they were met by Ronald Barton, Special Agent for the Utah Attorney General’s office who told everyone they could not leave stating he was detaining the group for trespassing on state trust lands.  Ronald threatened to charge parents with reckless child endangerment. He also instructed a news reporter who had wanted to follow the group that she would be arrested if she attempted to do so.

Near Children’s Legacy camp site, a Canadian company, US Oil Sands is hoping to extract tar sands. They are leasing SITLA land (which is public land). 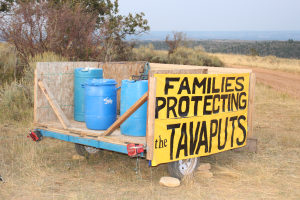 Inter generational camp out trailer at the horn.

Shea Wickelson, who led the biodiversity lesson, is a science teacher in Salt Lake City: “I have been camping here with my family for the past four years. Last year, we took some biodiversity data with my son and others. This year we wanted to see how the mining expansion has impacted the area and take new data. We were surprised to see the area so razed because we had read that US Oil Sands was ending development, but it looks like a significant expansion to us. I am disappointed to find out that my family and I are no longer allowed to be on the public land that we have been visiting for the past four years.”

Natascha Deininger of Wasatch Rising Tide: “It’s ironic that local law enforcement is so concerned with protecting industry interests, when the land in question is actually public, and was ultimately stolen from the first nations of this area. It is outrageous that a science teacher is being detained for teaching kids about biodiversity on public land, while US Oil Sands is destroying hopes of a livable future.”

Raphael Cordray of Utah Tar Sands Resistance: “We have a responsibility to the public to document and witness the damage to the area. We are investigating a crime scene and making records of what is happening here. The decision makers and regulators are ignoring the real concerns about this project.”

for another account of these events see Deanna Taylors blog: