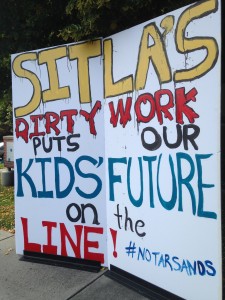 That’s right, we rolled in with our water barrels, tents, and banners, and set up shop at high noon today.

Join us if you can. Bring food or coffee, and it will be a party. 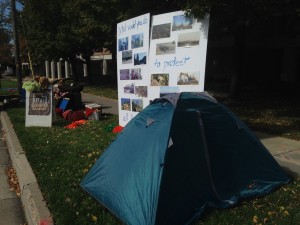 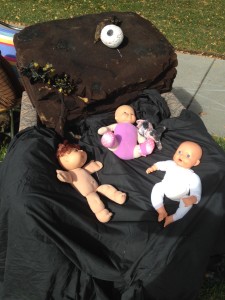 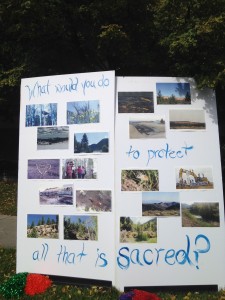 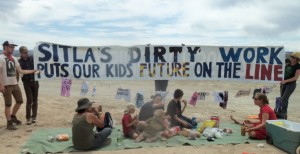 SALT LAKE CITY, UT: On October 21 at noon, members of Utah Tar Sands Resistance and supporters launched a 24-hour vigil in front of SITLA (School and Institutional Trust Lands Administration) in Salt Lake City. This summer and fall, beginning in mid-May, they have been holding an ongoing protest encampment in the Book Cliffs of eastern Utah, at the site where US Oil Sands is attempting to start the first commercial tar sands mine in the U.S. Now, they have brought their protest to the front doors of the agency responsible for leasing the lands, SITLA, located at 500 S/700 E, Salt Lake City.

The group chose to launch their vigil the day before SITLA’s next board meeting, which will take place at 9 a.m. on October 22. SITLA’s board is stacked with developers chosen by the governor, and its decisions to lease land for the world’s dirtiest energy sources—like tar sands and oil shale—stand in stark contrast to its mandate to never sacrifice short-term gains for the long-term wellbeing of Utah’s children.

In reality, SITLA contributes just 1–2% of the public schools’ budget. What do SITLA’s choices actually give the residents of Utah? The high rate of infant mortality in the Uintah Basin and the red air days in the Salt Lake Valley during which children and pregnant women are told to stay indoors, for starters. Human health will be jeopardized even more if the world’s dirtiest projects are allowed to take root in Utah. Along with decimated ecosystems, dwindling watersheds, and climate chaos, these realities show that SITLA’s choices are giving our children a toxic and frightening future, leaving them to cope with previous generations’ mistakes.

Jill Merritt, a mother of four and a grandmother, says, “SITLA’s choices put my grandchildren and future generations in grave danger, leaving them with a world torn apart by climate chaos, poisoned rivers, and toxic air. We call on SITLA to immediately rescind their leases for tar sands and oil shale, and start focusing on the long-term wellbeing of our children.”

Utah Tar Sands Resistance encourages all concerned members of the public to join them in standing up for a livable future. Their vigil is a family-friendly environment that they hope will serve as a public forum in which people can discuss their concerns about the management of public lands and resources. They will be recording stories on the site for a video project on this issue, and they invite kids, parents, and other members of the public to come share about their concerns for the environment and their love of Utah’s public lands.