Then on Monday, two tripods went up on the newly-bulldozed haul road that leads into the destruction zone, set up by stealthy and quick-moving allies. No sooner had they thrown up the tripods than two agile climbers had pulled themselves up into their apexes, all before the cops posted at the processing site down the road must have had any idea what was happening. 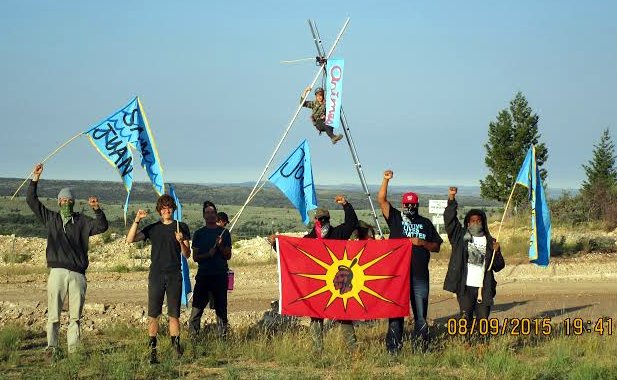 Watch this awesome video of the action from Direct Autonomous Media!

As the day wore on, spirits stayed high, with folks singing, chanting, and calling moral support to the tripod sitters. By late morning, a cherry picker had finally arrived to extract the folks perched on the tripods. But after the cops arrested the  first tripod sitter, and the cherry picker was moving toward the second, another quick-thinking comrade locked to the cherry picker itself, causing a serious delay to the extractions! 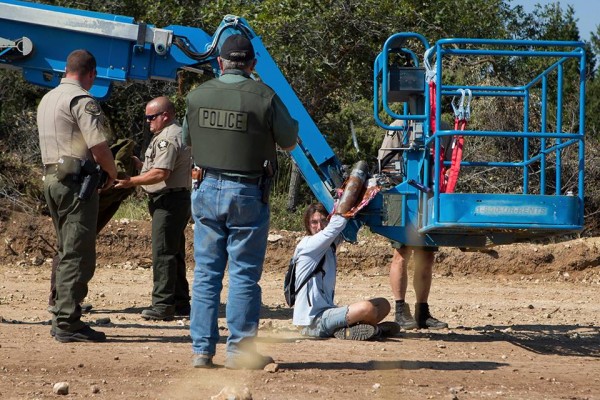 For more coverage of the action, visit PeacefulUprising.org/aca2015

We’re so very grateful for the brave folks who took action to defend Children’s Legacy Camp and the legacy we are leaving for the children of our world. The images of the bulldozed site speak for themselves: The only legacy USOS would leave our children is one of toxic destruction. We think they deserve something better. Join us at the vigil to see for yourself what is happening and get involved!