Marches around the country this week show ideological diversity among a new cohort of activists.

(This article has been re-posted from High Country News) 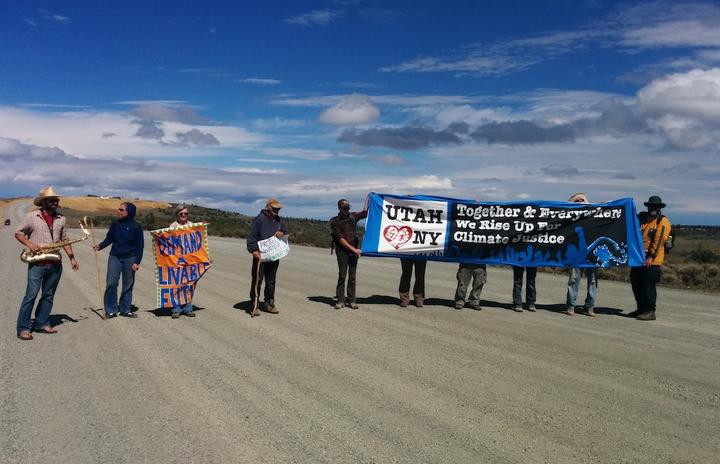 Protesters march toward U.S. Oil Sands’ test pit, on the East Tavaputs Plateau in Utah’s Book Cliffs. The company is moving toward opening the first commercial tar sands mine in the U.S., and began clearing a site for a processing facility down the road this summer.

Last Sunday, under a pocket of blue sky, some 30 people spilled out of vehicles onto Seep Ridge Road, a wide thoroughfare that traverses a remote spine of eastern Utah’s Book Cliffs, and is in the process of being paved. Many in the group wore hats or wrapped their heads with scarves, then tied bandanas over their noses and mouths. They looked tough, hard-edged, but not without a sense of humor. One woman carried a shepherd’s cane, one man wore a clown mask, and another played tunes like “This Land is Our Land” on a saxophone. The wind whipped them energetically.

The guises were defenses not against the weather, but against the cops and a security camera trained on a test pit for what could soon become the first commercial tar sands mine in the U.S. Tar sands contain an unconventional crude called bitumen, that with a great deal of water and energy can be extracted from sand and rock, and refined into fuel. The industry is big business in Alberta, Canada, and one of the most carbon-intense fossil fuels. U.S. environmentalists have fiercely opposed the Keystone XL pipeline, which would transport Canadian tar sands crude to U.S. refineries, in a bid to influence further development to the north. Less known, and less opposed nationally, is the push to develop Utah’s own tar sands deposits.

The protesters were here to say “no” to the development, because as one explained earlier in the day, “These days, if you’re not saying ‘no,’ you’re saying ‘yes’.” It felt good to say “no,” another told me, and to do so publicly.

After all, the politer approaches to solving the climate crisis, the attempts by big environmental groups to work inside the halls of Congress, to compromise, and to wield science to compel action, had failed. It was time, the protesters believed, to confront the problem at its source – carbon spewing projects like this one – and to do so loudly. A few among them unfurled a banner declaring “Together and Everywhere We Rise Up for Climate Justice.” The group began to march toward the test pit. 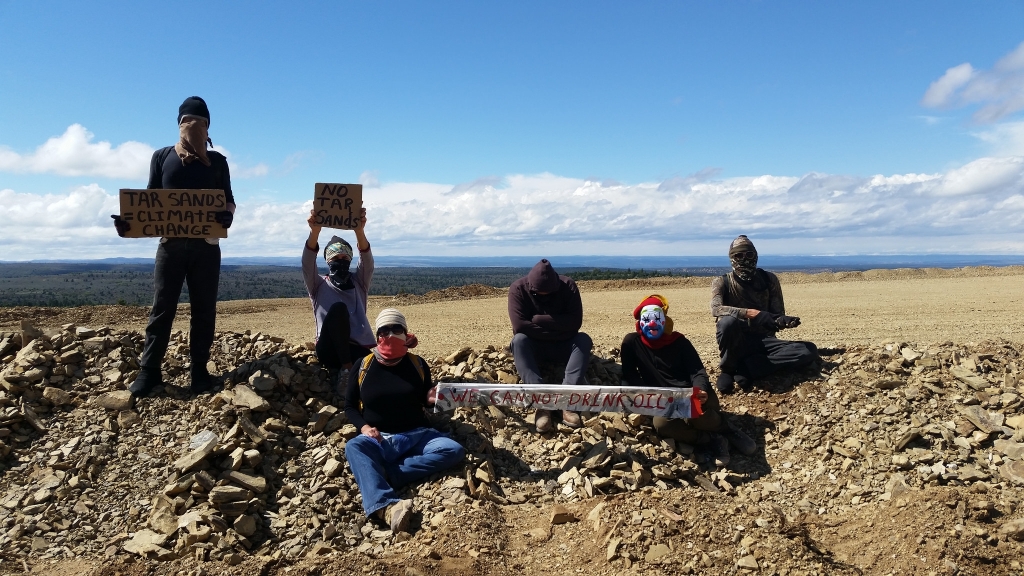 Protesters pose for photos at a construction site where U.S. Oil Sands plans to build processing facilities for its mine.

The banner was a nod to the “People’s Climate March,” underway simultaneously in Manhattan, where a crowd more than 10,000 times the size jammed the streets. Politico called the Manhattan event “a coming-out party for a new breed of environmentalism – one that’s louder and rowdier than the old-school greens who dominated the movement when Barack Obama entered the White House.”

Indeed, grassroots groups like 350.org, an organizer of the New York demonstration, have risen in recent years in part in reaction to the failures of the mainstream environmental movement to make meaningful progress on mitigating climate change. They’ve attempted to move the political system from the outside. In February of last year, they staged a large public protest in Washington D.C. against the Keystone XL pipeline, in which for the first time in its 120-year history, the Sierra Club endorsed an act of civil disobedience – albeit a pretty tame one – and its executive director, Michael Brune, was arrested for tying himself to the White House gates, along with Robert F. Kennedy Jr., Bill McKibben, and civil rights activist Julian Bond. They’ve also pushed universities to divest from fossil fuels. McKibben, one of 350.org’s founders, has said the idea is to use universities to make fossil fuel companies social pariahs, and thus erode their political clout.

But if 350.org and the hundreds of thousands who joined them in Manhattan last weekend represent a new, rowdier faction of the environmental movement, the Utah protesters, and local groups like them around the country, represent the rowdiest new faction.

I spent last weekend with the group, for a future story on the new grassroots climate movement. A handful of activists have lived in the Book Cliffs all summer, staging occasional protests, committing acts of civil disobedience, getting arrested, and looking for leverage to stop the tar sands mine from proceeding.

Though many of them were supportive of the New York march – any protest is better than no protest – they were also critical of it. For one thing, it was planned with the consent of the police, and organizers got a permit, a faux pas among many direct action activists, who thrive on the element of surprise and don’t believe in asking permission. Plus, organizing the march required huge amounts of money – and for what? Marchers weren’t confronting or trying to stop a specific threat. Might those resources – not to mention the power of so many voices – be better spent on the frontlines, in places like Utah, where the tar sands industry is poised to gain a domestic foothold?

The Utah protesters – most of them affiliated with Utah Tar Sands Resistance, a group specifically trained on stopping local mines, or with Peaceful Uprising, the environmental and social justice group formed after Tim DeChristopher’s disobedient purchase of oil and gas leases –  more enthusiastically anticipated Flood Wall Street. That was the much smaller, unpermitted, more radical and politically aggressive sit-in that followed the People’s Climate March in New York, and was described by one participant as a “family reunion” for the Occupy movement. Its slogan: “Stop capitalism. End the climate crisis.”

That gets at a defining feature of this faction of the climate movement: It is made up of people who consider themselves social and economic justice activists as much as environmentalists. Many of them were galvanized around climate issues by the Occupy movement, or by DeChristopher’s creative and infamous act of disobedience. They speak less of climate change, and more of climate justice, which the group Peaceful Uprising defines as “the intersections of environmental degradation and the racial, social, and economic inequities it perpetuates.” They are Earth First! for the global warming era, with a social justice twist.

When the Utah marchers arrived at the test pit, about half of them scrambled through an opening in the fence, past “no trespassing” signs, and into a hole in the ground that exposed the black, crude-laced rock and supported a small pond of rainwater, tinged brown. They stood beside the pond with their banners and posed for pictures. The clown climbed atop a pile of excavated tar sands rock and thrust his hands and a cardboard “No Tar Sands” sign into the air. The cops didn’t show.

There was scarcely anyone out here to witness the protest, but one organizer had assured that it didn’t matter; she could find them an audience online after the fact. The message that would accompany the pictures, the group had decided that morning around a campfire, would be directed at all the folks in New York: Come here next year, to the source. Get rowdier with us.

2 thoughts on “Faces of the grassroots climate movement: rowdy and rowdier”