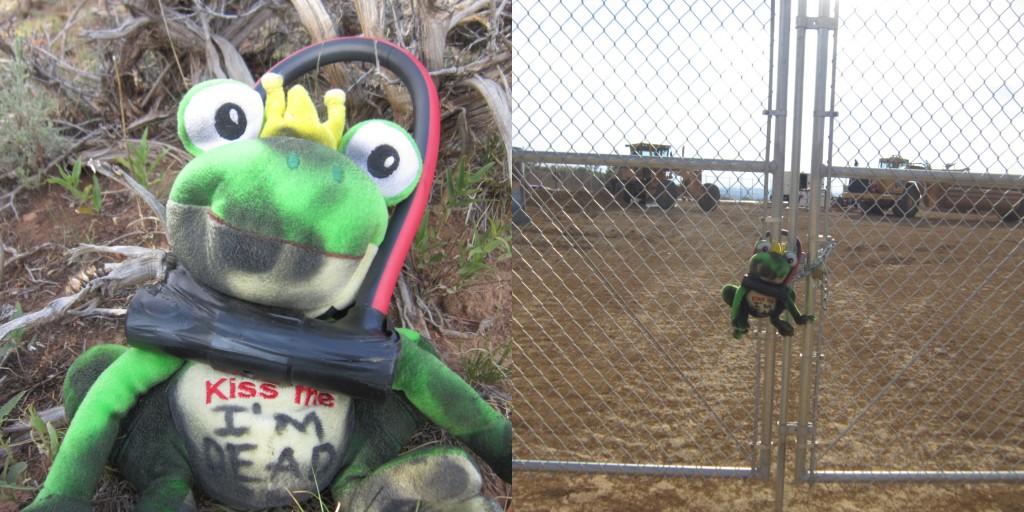 Inspired by friends taking a halt to tar sands mining in Utah for years, we frogs sprung into action this morning. At 8AM, just before the work crew arrived, we hopped out of the woods and helped a comrade u-lock their neck to the front gate of the area where machinery is stored.

Our friend had also covered themselves with tar sands to symbolize how millions of frogs and other animals downriver—humans included—would be impacted by tar sands mining. Today we take a stand for all the living beings down the Colorado River who would be poisoned by tar sands toxins and who’s water would be stolen by industry.

We come from various downriver habitats that would be severely impacted. Our journey here symbolized the mass migrations that so many species have been forced to endure. Braving the desert dryness and heat helped us to realize more deeply what it is like to be an endangered or threatened species with nowhere left to go.

Our action followed on the heels of a human-lead action that halted work for most of an afternoon last Wednesday. (insert hyperlink)

When workers approached the gate, they were clearly confused. Our comrade told them we would not allow work to happen today, to which  they replied, “But you’re a frog.” They debated among themselves about calling the cops, but ultimately decided against it. We imagined the 911 call: “Officer, we have a frog situation…”

Work began late that morning after they decided to extract our friends on their own, but we all felt it was a win. Tar sands resistance happens not just in big, high-profile action camps, but in repeated daily acts that challenge the powerful and take a stand for all living beings. Maybe next time it will be the chipmunks or the rabbits rising up, and when they do, we will be right there, on the front-lines, with them.

Ribbits and Solidarity,
The Frogs

One thought on “Frogs in Action Against Tar Sands!”