This week, twenty-one people were arrested while engaging in peaceful civil disobedience in protest of a controversial proposed tar sands mine in northeastern Utah, which would threaten local land and water, as well as contributing to the global climate crisis. As they await charges, national environmental organizations expressed their solidarity with the protesters who stood for our freedom from dirty fossil fuels and devastating climate impacts.

“This could be the first large-scale tar sands strip mining in the Unites States, and this filthy industry threatens our air, water and wildlife,” said Valerie Love, No Tar Sands Campaigner for the Center for Biological Diversity, who was one of the 21 arrested at the site.  “We staged our protest on behalf of the millions of people who will be affected by this dirty fossil fuel mining. Over 40 million people and many wildlife species depend on this watershed. We need to say no to tar sands mining.” 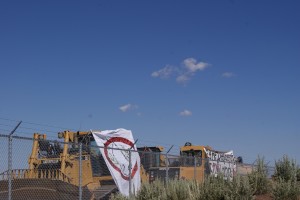 “Rainforest Action Network stands in solidarity with the Utah anti-tar sands protestors whose commitment to protecting our air, water and climate—at the expense of their own freedom—is inspiring,” said Lindsey Allen, Executive Director of Rainforest Action Network. “Our movement is already working hard to prevent the Keystone XL from delivering tar sands oil across our borders; we can’t allow the practice itself to be imported to our cherished wild places. We applaud the local Utah campaigners for fighting to stop the first-ever tar sands mine in the United States.”

“Tar sands are the dirtiest fuel on the planet. By shining a spotlight on these dangerous projects, protestors in Utah are doing the world a service–they deserve our support, not jail time. If the government won’t act to keep tar sands in the ground, then the people will. The power of nonviolent direct action has helped block tar sands pipelines and mines from Nebraska to Maine to Alberta. This resistance is strategic, it’s effective, and it’s ultimately going to carry the day,” said May Boeve, Executive Director of 350.org.

“We owe a debt of gratitude to the brave people in Utah who are risking themselves to protect us all,” said Luísa Abbott Galvão, of Friends of the Earth. “We’ve seen from Canada that tar sands production is incompatible with environmental sustainability, land rights, and the public health.” 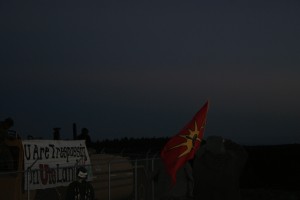 “Mining tar sands in Utah would be disastrous for local communities and the water, and would be a major setback for the country’s efforts to stop climate change,” said Kendall Mackey, National Tar Sands Organizer for Energy Action Coalition. “Youth activists across the country stand with those opposing tar sands mining in Utah and stand ready to use our political and financial power to stop it.”

“Tar sands is the dirtiest source of oil on the planet.  We’ve seen the destruction being caused by tar sands everywhere–from the strip mines in Canada to the ruptured pipelines that dump tar sands crude into American waterways and neighborhoods,” said Marion Klaus, a Sierra Club volunteer leader who lives in Utah. “The Sierra Club stands with citizens everywhere who are fighting dirty fossil fuels and getting to work creating the clean energy prosperity this country needs.” 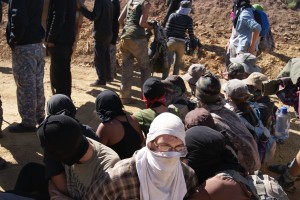 “The Utah 21 are not alone.  These brave and principled nonviolent activists are only the most recent to take their turns on the front lines against extreme energy extraction and for a safe climate and clean energy future. Many have preceded them and more will surely follow.  Our movement is already winning as we have effectively limited tar sands production by blocking its export out of North America.  The oil industry and the Obama and Harper governments should expect more protests, marches, and civil disobedience until energy policy is brought in line with what climate science demands – anything less is climate denial which we, and activists around the country, will not tolerate” said Steve Kretzmann, Executive Director of Oil Change International.

“Greenpeace stands in solidarity with the brave activists who have put their freedom on the line to prevent the construction of the first-ever US tar sands mine. We can’t hope to solve the climate crisis if we continue to extract and burn the dirtiest fuels on the planet. In the face of devastating droughts, floods, and fires, non-violent direct action is a necessary tool to confront injustices where governments and corporations have failed to act,” said Gabriel Wisniewski of Greenpeace.

SHOW YOUR SUPPORT BY DONATING TO THE UTAH LAND DEFENDERS LEGAL SUPPORT.