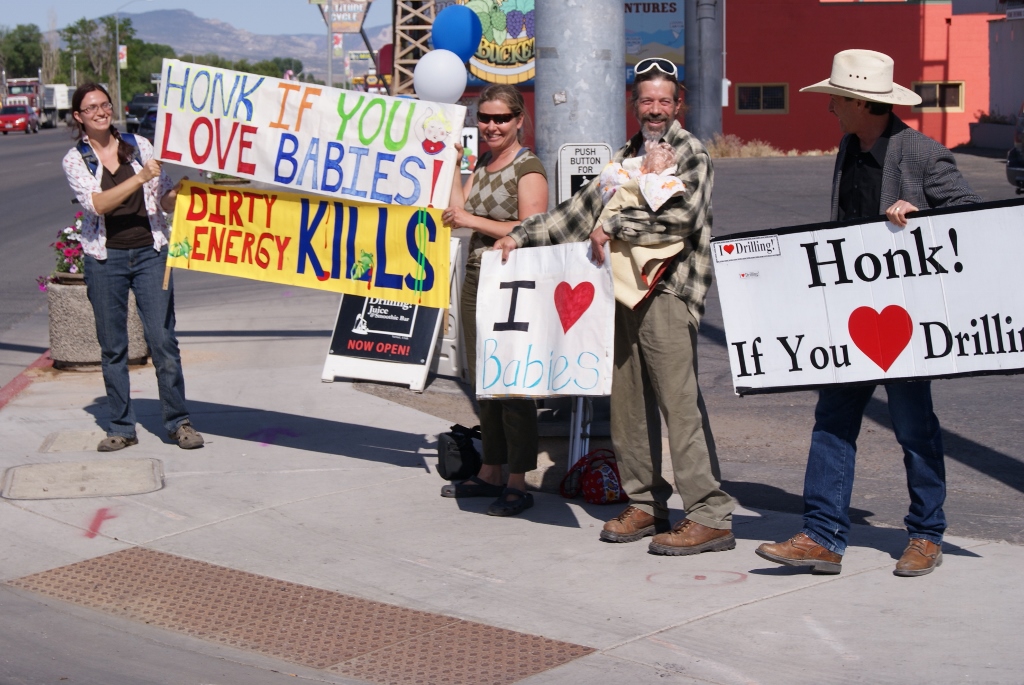 In May, news erupted about a startling number of dying babies in Utah’s Uintah Basin, (what should be Ute territory, actually) where fossil fuel development is the center of the community’s economy and even its culture.

No one person better symbolizes the cultural centrality of the fossil fuel economy in the Uintah Basin than George Burnett, owner and operator of the I ❤ Drilling Juice shop in Vernal. It might seem unlikely, but a juice shop owner (he also sells camo truck seat covers) really is among the most prominent and well-known cheerleaders of the oil boom(-and-bust) economy here. He’s made himself and his businesses locally famous by standing on a street corner with a sign that says “Honk! If you ❤ Drilling!”

“They’ve asked him to be the mayor,” his son tells us.

Here in the UB, he’s kind of a Big Deal. A Big Deal who goes way over the top lionizing the fossil fuel economy and denying the merest existence of any downside or flaw.

Along comes a heroic whistleblower midwife who complicates the frack-fest party for a moment by daring to ask whether the Basin’s terrifyingly high infant mortality rate might be tied to environmental factors. The Basin has terrible ozone pollution, for example, due to leaking oil rigs and prevalent flare-offs at well sites.

Midwife Donna Young did a brave thing and is surviving a serious backlash now because of it. This is a community where virtually everyone–like really nearly everyone settler or indigenous—lost their jobs or home during parts of the 80s and 90s when the oil economy here slowed dramatically and then pretty much stopped for a bit.

In that context, Donna Young nevertheless asked her community to look at the darkest side of the decades-long oil boom-and-bust binge: dead babies. And that’s awesome.

Our support and thanks to Donna Young are endless and pure, but the issue for the community and for us is incredibly complicated. It feels for some people like it’s a choice between widespread economic uncertainty (and all the related health and social problems that brings) or a thriving oil economy that makes more people more money comfortable even if it poisons everyone in the Basin (and beyond!) and, well, might contribute to really high baby death rates where its toxic trail is found. Yikes.

The Uintah Basin’s oil primarily gets refined in and around Salt Lake City, so the people there are also poisoned by the toxins. The people of the world together have to deal with the climate chaos that these fuel products create.

So we wanted to remind people of Vernal–as the region begins a dangerous experiment with tar sands and oil shale strip mining–that these projects come at a serious cost. That doubling down and using fracking fortunes as an ante for a region-wide tar sands/oil shale/nuclear/fracking extravaganza will kill more people, especially vulnerable populations like old people and babies. We need to reject the fossil fuel economy that makes us sacrifice our air, land, water and even our vulnerable people in exchange for a fair living and demand safe environmental standards in our communities.

Capitalism creates the boom-and-bust cycle that exploits and poisons and kills and puts people over profit, and we must uproot it. We recognize that End Capitalism is not always a popular message in communities like the Uintah Basin–especially not during boom times like these–but you can’t just can’t escape the truth: Capitalism is unsafe for babies and other living things.