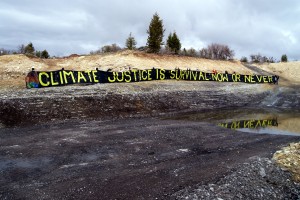 People hold a giant banner inside the tar sands mine. The banner reads: Climate Justice is Survival Now Or Never.

Last weekend, tar sands resisters new and old gathered in the Book Cliffs of so-called Eastern Utah, at PR Springs, site of the first proposed tar sands mine in the United States. This gathering marked nearly three years of observation, law suits, and direct action against the project, and signaled the beginning of a permanent protest vigil inside the boundaries of public lands leased for strip mining.

U.S. Oil Sands, of Calgary, Alberta, has leased over 32,000 acres of land traditionally inhabited by Ute and Shoshone people. The land is now managed by the Utah School and Institutional Trust Lands Administration (SITLA), and sits just outside the Northern Ute Ouray Reservation. The company has yet to begin full-scale production, and has spent the last year procuring their permits from the Department of Water Quality, wrangling $80 million from fly-by-night investors, and hiring Kellogg Brown & Root LLC (KBR) for project and construction management.

In March, Living Rivers brought U.S. Oil Sands (USOS) and the Department of Water Quality (DWQ) to the Utah Supreme Court, whose ruling we eagerly await, arguing that the permits given to USOS had failed to take into consideration the devastating impacts the strip-mining project would have on the precious groundwater in the region. DWQ stated that there was not enough groundwater to be of concern (though geologists from the University of Utah have found otherwise in their extensive study of the region’s groundwater systems) and is not requiring USOS to take any measures in their disposal of waste water used during their highly experimental and unproven new tar sands mining process. US Oil Sands is fond of stating that their project will use very little water, as it is completely dependent on a chemical called d-limonene (an expensive solvent, at $36/gallon), but their permit application itself states that they will still require 116 gallons of water per minute, which they have failed to procured in the five water wells they’ve drilled that tap into the Mesaverde Aquifer. In an interview published this week, the company stated that they’ve “hit on the idea of using a dryer” as part of the extraction process, though no data has been released about this, and it remains to be seen if the company has updated their permits to include this new technology.

In the same interview, Cameron Todd, the CEO of U.S. Oil Sands, stated, “We’re fully permitted and we’ve actually started work in the field already although most of the work won’t be done until next summer.”

In a May 14th press release, the company stated that they would  be completing Phase 1 of their project, at a cost of nearly $60 million, though their current stock price has halved from their $0.24 high to a measly $0.12, and mentions commercial start-up date of 2015.

This proposed time-line remains consistent with the company’s history, as they have pushed back full production year after year, having had a difficult time finding investors for a very risky project, and having been fought, both in the courts and in the very mine itself, by groups and individuals who vow that they will see the project stopped.

Last weekend’s act of civil disobedience saw protestors walk onto a the company’s 10-acre test mine with a huge banner reading “Climate Justice is Survival: Now or Never.”

While the land itself, once stolen from the Ute tribe, is destroyed, as carcinogens such as arsenic, mercury and uranium are leeched into the watershed, as tar sands and oil shale strip-mining add to the criminally toxic air quality of the Uintah Basin, and as the tar sands are trucked nearly 200 miles each day to Salt Lake City to be refined in poor and predominantly Latino neighborhoods, the Utah tar sands themselves are but one small piece of the global extraction monster. The fossil fuels our society has made itself dependent on have caused a man-made climate change emergency, and it is up to us to take a stand a say, “no more.” Tar sands are the bottom of the barrel, one of the dirtiest forms of energy found, and one that required mass amounts of resources to extract while proving very little usable energy. The Utah tar sands must remain in the ground if we have any hope of a livable future, and a coalition of passionate and dedicated people have taken a stand, saying “no tar sands!”

This summer, land defenders stand in vigil and protest, observing the actions and movement of U.S. Oil Sands, as well as several other tar sands and oil shale companies with greedy claims on the region, determining what areas are to be clear-cut or tested, and what infrastructure is built, as they prepare to stop them.