(The BLM is seeking public input on Enefit’s planned utility corridor project. All comments must be submitted by Aug. 1, 2012. Visit our Facebook page for more information on how to submit a comment). 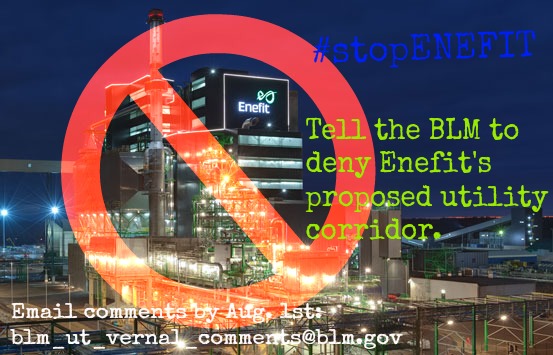 Tell the BLM to STOP ENEFIT!

Enefit, an Estonia oil shale company, aims to start mining oil shale in Utah in the coming years. But the odds are stacked against it—and if allowed to proceed, it would wreak havoc on the resources we all depend on. Utah Tar Sands Resistance is working to protect our lands and waters from oil shale and tar sands mining, for the sake of our own health and the wellbeing of all generations to come.

v    Oil shale requires massive amounts of water, and in the west, we don’t have water rights to give away. The Colorado is the most endangered river in America.

v    Water rights would have to be seized from farmers and communities.

v    The Colorado would likely become polluted with dangerous compounds that seep into the watershed.

v    Toxic substances would be carried by pipes, threatening our water sources and farmland.

Devastation of Our Wilderness Heritage:

v    Oil shale mining would utterly devastate huge tracts of wilderness. Hundreds of thousands of acres of BLM and state lands are at risk.

v    This would jeopardize the livelihoods of people in communities throughout south and eastern Utah who rely on tourism for their regional economy.

A History of Failure:

v    Oil shale has a hundred-year track record of failure in the U.S. It has never come close to becoming commercially viable.

v    Oil shale is an entirely different resource from shale oil and shale gas, which are pockets of oil or gas trapped within shale rock. Oil shale is not even oil—the word “oil” is a misnomer. It’s an “immature precursor to oil and gas,” as the Colorado School of Mines says.

v    Enefit only produces energy used for electricity in Estonia, not transportation fuel. Enefit must create an entirely new technology to mine oil shale in Utah—and experts from Estonia say commercial production would not be feasible for at least several decades out, if ever.

v    “The test results are not promising,” the company said in an internal document.

v    A wave of bad press in Estonia is barraging Enefit’s plans in Utah, saying it requires tremendous governmental subsidies to even make it viable—just like oil shale mining in Estonia. Enefit’s foolhardy attempt to make oil shale viable would devastate our lands and health, and we refuse to bear the financial and human health expenses.

Checks and Balances Project, “Eyes on Enefit: Financially Unstable and Unprofitable, and Not Ready for Prime Time”

3 thoughts on “Enefit: A Half-Baked Nightmare for Utah”