by Ben Jervey (reposted from DesmogBlog)

Think that that dirtiest oil on the planet is only found up in Alberta? You might be surprised then to hear that there are tar sands deposits in Colorado, Utah and Wyoming, much of which are on public lands.

While none of the American tar sands deposits are actively being developed yet, energy companies are frantically working to raise funds, secure approvals, and start extracting.

To help you better understand the state of tar sands development in the U.S., here’s a primer.

Where are the American tar sands?

The Bureau of Land Management estimates that there are between 12-19 billion barrels of tar sands oil, mostly in Eastern Utah, though not all of that would be recoverable.

This map from the Utah Geologic Survey shows all of the state’s tar sands. 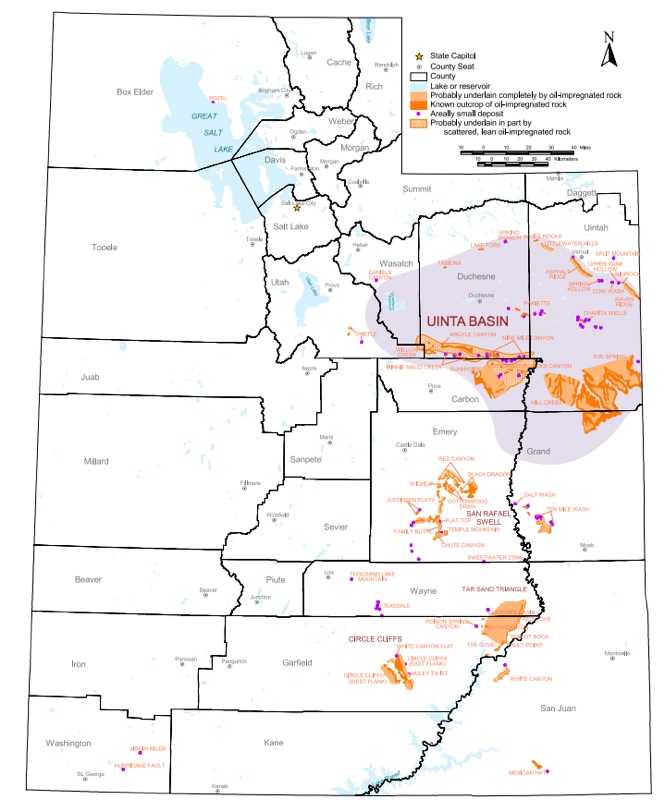 This map from the BLM’s Programmatic Environmental Impact Statement (PEIS) shows where the U.S. government’s “designated tar sands areas” are located. These are the areas that could, if approved, be developed. 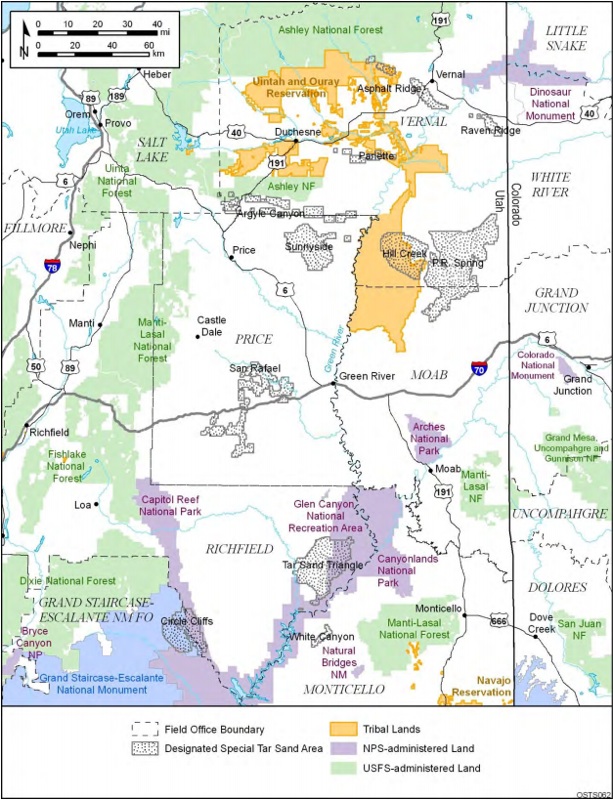 The state of play

Some state-owned lands in Utah have already been approved for speculation, but because of prohibitive costs and limited access, so far only test wells have been drilled.

In 2008, the BLM made roughly 431,000 acres of federal lands potentially available for tar sands leasing and development.

Last spring, the BLM decided to take another look, as new information about the potential impacts on these areas has come to light. Significantly, it also called to reduce leasable tar sands deposits from the 431,000 acres to “just” 91,000 acres.

On February 2, the agency released a Draft PEIS of these so-called “resource management plans,” and that environmental impact statement is now open to public comment until May 4, 2012. Find out more about the EIS and the public comment period at the Oil Shale and Tar Sands Programmatic EIS Information Center website.

The resource management plans and the EIS don’t only address tar sands development, but also oil shale. It’s important to make the distinction here between the two, as the plight of Albera has made many familiar with tar sands, but oil shale – which has far greater potential for domestic development – is not as well understood.

Here’s how the BLM defines the two:

Oil shale is a term used to describe a wide range of fine-grained, sedimentary rocks that contain solid bituminous materials called kerogen.  It should not be confused with “shale oil,” which is not addressed by the draft PEIS.  Kerogen, which is organic matter derived mainly from aquatic organisms, releases petroleum-like liquids when subjected to extremely high temperatures – more than 750 degrees.  Developers have been trying to produce oil from this rock in an economically-viable way for more than a century.  The majority of U.S. oil shale (and the world’s largest oil shale deposit) is found in the Green River Formation in Colorado, Utah, and Wyoming.
Tar sands are sedimentary rocks containing a heavy hydrocarbon compound called bitumen.  They can be mined and processed to extract the oil-rich bitumen, which is then refined into oil.  However, unlike the oil sands deposits in Canada, oil is not currently produced from tar sands on a significant commercial level in the United States.  Additionally, the U.S. tar sands are hydrocarbon wet, whereas the Canadian oil sands are water wet.  This difference means that U.S. tar sands will require different processing techniques.

In this post, we’re focusing on tar sands, but we will explore the oil shale component in a future post.

Who is making a play?

Curiously, the Big Oil developers of tar sands in Alberta have thus far stayed out of Utah. Experts believe that they’re letting smaller companies explore the early stages and determine the economic viability, which is far from certain.

As of today, there are two companies that have taken the lead on U.S. tar sands development.

U.S. Oil Sands has drilled roughly 180 test wells at the PR Spring Special Tar Sands Area in the Uinta Basin. The PR Spring Tar Sands is located on state-owned land near Arches National Park. U.S. Oil Sands Inc is awaiting approval from Utah state environmental regulators to begin producing oil, which they hope to do by 2013. The state lands the company is developing are surrounded by federal lands that the company also hopes to lease.

U.S. Oil Sands claims to use a more “environmentally-friendly” form of bitumen extraction that uses a citrus-based solvent to mine the tar sands.

(If you know of others, please let us know in the comments and we’ll update this resource page.)

Well, first, there’s the fact that between the extraction, processing, and combustion of tar sands oil, its the most carbon intensive fuel on the planet. But, locally, there are issues as well. One of the biggest, especially in the arid Southwest, is water scarcity.

In 2010, the Government Accountability Office (GAO) released a report (pdf) that condemned the BLM’s plans to open up so much public land to oil shale and tar sands development, warning of water shortages.

The Colorado Riverkeep group, Living Rivers, is opposed to the projects as well, citing water as their chief concern.

A September 2010 report by Western Resource Advocates, “Fossil Foolishness: Utah’s Pursuit of Tar Sands and Oil Shale” (pdf) rebutted industry claims that 95 percent of the water used would be recycled, explaining that that figure didn’t account for power generation on site, refining and other demands.

But perhaps the best collection of concerns for oil shale and tar sands development come from the development-friendly Utah state government itself.

It’s worth quoting in full the list of “impediments” discussed in the 2006 memo:

The public comment period for the BLM’s Draft PEIS closes on May 4. Then the Bureau will take those comments into account and will revise the statement. The Final PEIS is expecting in October, and that will be followed by a 30-day public comment period. Considering that final statement, land-use plans will be finalized by December.

The BLM site has information about how to submit a comment, contact the local BLM office,  and other ways to get involved, as well as a useful FAQ section about both oil shale and tar sands development in Utah.

For more information, visit the sites of these organizations working on the issue: